When I tell people who don’t live here south-central Idaho is an amazingly beautiful and unique place, I generally get a loud guffaw followed by a look of extreme disbelief and sometimes, even pity.

Most folks zoom along I84 from the Oregon border to either Utah or Pocatello in a desperate 80 mph daze, fervently hoping they don’t suddenly come across road construction, accidents, or heaven forbid–one truck passing another at the disgustingly slow speed of 70 mph.

When seen from the Interstate, or even from most state and county highways, south-central Idaho isn’t all that pretty. After all, it’s a high dessert and by mid June, anywhere there isn’t a pivot, wheel-line, or hand line, the landscape is dirt brown, littered with the dull gray of sagebrush and dotted with solar panels or stark-white windmills.

If I didn’t know better, I would absolutely agree with my fine uninformed friends. When you bomb through south-central Idaho, it really is kind of ugly.

But I do know better. I have to admit as a kid, I didn’t pay much attention to my Idaho. It wasn’t until I joined the Army and subsequently traveled to many other states and oversees, I realized where I grew up was one of the most unique places, not only in America, but in the world.

Idaho sports the deepest canyon in North America, yes even deeper than the Grand Canyon. We call it Hells Canyon. Shoshone Falls is taller than Niagara Falls. We have more gems in our state than any other state, and over 50 percent of our great state is still unsettled wilderness.

But, you have to get off the beaten path to see the true beauty of those springs and the thousands of other amazing sites that are the true south-central Idaho.

Recently, I took a hike to the 11th largest spring in the continental United States. One might assume a spring that gurgles 2,640 gallons of water per second (that’s 180,000 gallons per minute) would be overflowing with tourists. The water is pure blue and crystal clear.

Turns out, I was the only one standing on the platform that overlooks the 100 or so foot drop to the gorgeous vista below. It really was in utter peace and tranquility that I stood there for nearly forty minutes and never heard the sound of another voice, the rumble of a vehicle, or the buzz and snap of hundreds of cameras.

Occasionally, my thoughts were interrupted by the chirp of a rock chuck, or the cry of one or more of the dozens of bird species that make this spring and it’s canyon walls home. But other than that–total peace.

Every one should share their travel experiences right? Meet my buddy, rocking chuckles. He sat a few feet away from me for nearly 20 minutes enjoying the view too. 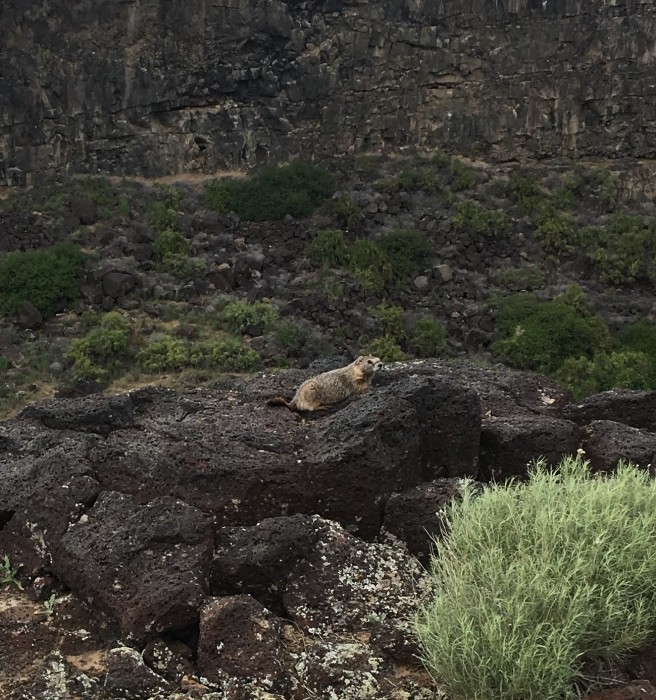 I was born and raised in the great state of Idaho, and spend as much time as I can writing, traveling, exploring, and enjoying life's amazing adventures. My husband and I own a cattle ranch in a tiny Idaho town aptly named Bliss. I've written much on history, especially for regional publications, but my dream is to someday publish my middle grade fantasy series: THE BRISTOLON CHRONICLES. View all posts by bristolonchronicles

2 thoughts on “Idaho is best discovered off the beaten path.”